Spent a lovely evening a little while ago in Portrush in the company of my cousin Adrian--a guy I've been friends with since we were kids--and two of his lovely friends Molly and Smokie who live now in the England and Wales but come to vacation at their family home here. Marvelous girls and much laughter and vino was consumed by all. Their house commands breathtaking views of the East strand--a gently curving golden sand beach that dips without fuss until engulfed by the cold, frothy Celtic eye-blue waters of the unpredictable Irish sea. Waking up was a treat because I pulled the bedroom curtains open to look down on the beach where a two muscular chestnut and black horses were being put through their paces, first cantering then galloping along the length of the beach.

The previous evening--after first meeting the ladies and sipping a few glassfuls of champers--Adrian took me out to dinner at a very decent Italian restaurant where we caught up with a lot of family stuff (immediate and extended) and stuff we'd been both been doing for the past few years. The week prior my sister Siobhan and her hubby Michael had had him and our Aunt Mary over for a delicious supper (a supper that included my favorite sherry trifle pudding for desert) during which Adrian regaled us with anecdotes from a recent Russian trip he'd made that was hilarious, so much so indeed we were doubled over with laughter. He should have been a writer, too. I think its in the familial genes.

As I watched him at my sister's and then at Molly and Smokie's, I thought how grateful and happy I am to have re-acquainted with him. Life has many twists and turns and it becomes so busy we can never seem to carve out space and keep up with the doings of cousins and past friends. I love meeting new people, immediately knew Molly and Smokie will be good friends, but it's wonderful to be able to make time to spend with relatives and old friends. It's what life's about.
Posted by M. Damian McNicholl at 10:26 AM No comments:

So many 'shades' of rain

I'm presently in Northern Ireland visiting family, which is wonderful, but I'd forgotten just how many different kinds of rain there is on this island. There's driving rain, gentle rain, blinding rain, tepid rain....on and on it goes and people know by the color of the clouds exactly what kind of shower they're going to get. I suppose the many types and quantity is the price to pay for the enormous variety of colors of grass there is that ranges from emerald to kelly-green. And it's also responsible for the fantastic vibrancy of the flowers adorning the street corners of every town and village throughout the province. Every town also has huge arrangements by their entrances--some arranged in the ancient crests of the town--and the colors of the petals is so intense the flowers actually appear as if made of plastic. An artist's paradise.

Last week we nipped up to the ancient city of Derry (Londonderry to some)to meet our friends from New Orleans who're on a trip of Ireland that began in Belfast. They're traveling with their friends Jan and Bob Carr--who were formally the 'Richard and Judy' of New Orleans, later moved into radio and had me on as a guest on their show just before Hurricane Katrina struck and their radio station has not returned to the air waves--and all were stunned by the beauty, cuisine and wealth of Northern Ireland.
Posted by M. Damian McNicholl at 7:25 AM No comments: 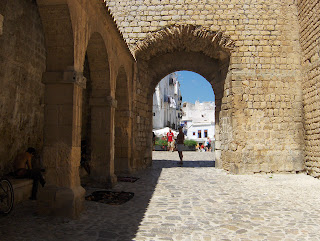 Gates to the ancient city of Ibiza
What a wonderful vacation destination the island of Ibiza is. It lies off the coast of Spain and is one of Europe's real holiday destinations because it's full of Germans, Italians, Spanish mainlanders (of course), a smattering of French and no Americans. I was truly astonished by the latter reality, so used am I to encountering American accents.

Of course the dollar is performing so crap against the Euro and Pound this past few weeks that's it's hardly surprising Americans aren't flying overseas this summer--but while painful, this doesn't fully account for the paucity of my fellow countrymen I was told by some of the tourists residing at the hotel Larry and I stayed at. Apparently, while it's an open secret that it's a hotspot for Europeans, it really isn't known or been discovered by Americans...as yet. 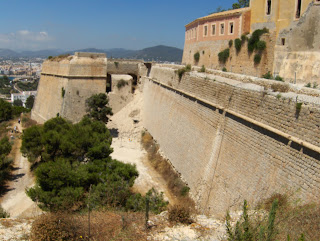 A fascinating island, the main city bears the same name as the island and was established by the ancient Phoenicians who built the old city on top of the hillside. (Indeed, a friend informed me that the Phoenicians were marvelous traders who created salt flats using plumbing that is still in use today and that much of the salt is sold to Britain for use on their roads In many respects it's similar in outlook to Dubrovnek in Croatia--meandering streets, museums, Roman ruins, spectacular views of the shimmering bay below, but the restaurants are of a better quality and the buildings better maintained more vibrant in appearance.

We met up with our friends Niall and Poul who'd flown in from France for a 50th birthday party of a good friend and spent the following four days in their company. Days were spent at the beaches and, as a result, their friend David (the birthday boy) and his partner Domingo invited us to join in the celebrations, including a delicious Paella lunch cooked over an open fire by the seashore and a marvelous BBQ at their sunwashed 'Can' (which means 'house') just outside the city of Ibiza. There we met a great number of their friends who'd flown in from all over Europe (and even a few guests from Boston).

Only downer of the whole trip was the dispiritingly sour attitude of one of our middle-aged German hosts at the hotel. The chappie was a wee bit mutton dressed as lamb due to a foppishly boyish haircut and a penchant for clothing far too young for him. Constantly on unblinking surveillance, he prowled the common areas from morning to night as if expecting us to pee on the patio when present or perhaps move a table, umbrella or rickety chair out of precise alignment or even imbibe a second cup of cheap coffee over our unchanging continental breakfasts. (I never want to see another razor thin slice of fatty schinken (ham), grayish leberwurst or a previous night's hard-boiled egg in my life...at least for the next twenty years. What was most annoying was how his attitude changed when he knew a guest was German--then his face creased into an unnatural smile and he laughed and giggled and chatted, even joked in German, totally oblivious to the fact I could speak it, which I made him aware of on the last day. I also left him a little note in their guestbook. Maybe it'll work wonders--though probably not.
Posted by M. Damian McNicholl at 10:10 AM No comments:

M. Damian McNicholl
I was born in Northern Ireland and came of age during The Troubles. Wrote a first novel while commuting to work as an attorney in NY. It still exists as bits and bytes on a floppy disk and will probably never get revisited because I got sick to death of the heroine after spending two years with her. So bored with her situations did I become (or was it an unwillingness to do yet another edit?), I packed her into a trunk and commenced my second novel that got published both here in the US and UK. It's called A Son Called Gabriel. To my surprise, it took on a life of its own by getting selected as an ABA BookSense Pick and becoming a finalist in a couple of literary awards. I'm now busy with my second novel, a transatlantic tale set in London and NYC, and mulling the plot for another novel. E-MAIL: damianmcnichollvarney-AT- gmail-DOT-com